Pantavisor Linux is a framework for building containerized embedded systems. It implements a version of lightweight Linux Containers (LXC), and is the easiest way to build a software-defined Linux Embedded product. With your Linux distribution or custom-made firmware userland in containers, your system gets the benefits of portable container lifecycle management without having to replace your distribution or worse the board.

Pantavisor Linux creates the building blocks for a universal Linux non-OS that frees up your team so they can focus on features and services. It provides a simple way to deploy and manage your containerized embedded OS components across millions of devices in a portable and reproducible manner.

Pantavisor Linux can also convert Docker containers into LXC format to run on all types of devices and boards, including those with the smallest resource footprint. Turn firmware, the OS, and even the BSP into portable, cloud native, containerized building blocks that can be shared and deployed transactionally over the air.

Pantavisor Linux containerizes your firmware, the OS, the networking and even the Board Support Package (BSP) making them modular and portable building blocks that can be shared and managed atomically over the air. With everything containerized on the device, it’s simple to mix and match these components to build new distros and maintain any customizations you may have that are specific to your use case without having to replace your distro or worse the entire board. 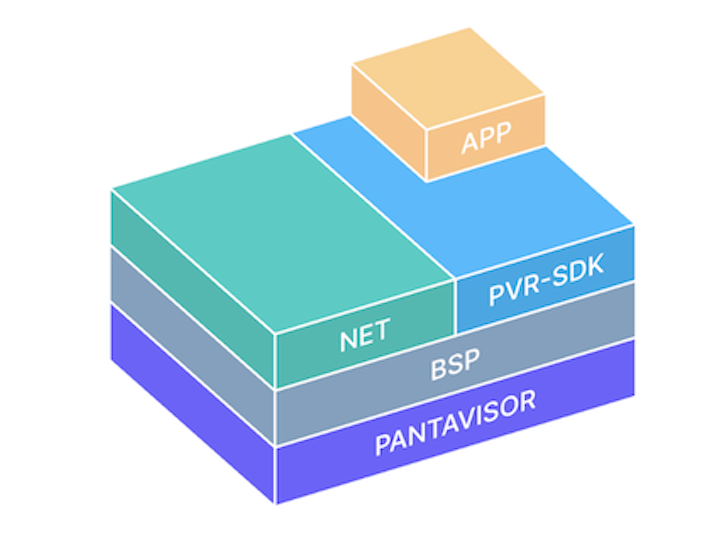 These are the base reusable building blocks that Pantavisor Linux modularizes and turns into containers:

Pantacor Hub is the open source device state management system. You can think of it as a cross between an image sharing repository for apps and devices as well as a device system revision repository. The hub allows you to share images and device data between team members or other users. It also manages the atomic revisions of the device state for over the air updates across device fleets and you can configure device and application meta-data.

Pantavisor is written in C, with an emphasis on the embedded Linux ecosystem. It is meant to be a single-binary init system that boots directly from the kernel and becomes the first process to run, which then brings up the rest of the system as a set of well-defined micro-containers.

We aim to bring a full set of containers functionality into the single binary, while keeping its size as small as possible to make sure it can cover the low-spec end of the market. Depending on the functions that are built, the size can vary, but the average size for a fully functional system puts the Pantavisor binary at around 350 Kilobytes (as compressed initial ramdisk).

Pantavisor uses pure Linux container technology, for which we use parts of the LXC suite as a library to wrap around the basic building blocks of containers. Due to the fact that LXC is also a pure C project, we are able to keep the overall footprint of Pantavisor quite small.

Pantavisor is MIT licensed, which means tons of flexibility for commercial projects, without the headaches of a pure GPL codebase. The container runtime plugin system makes a clear separation of the provider library and Pantavisor itself.